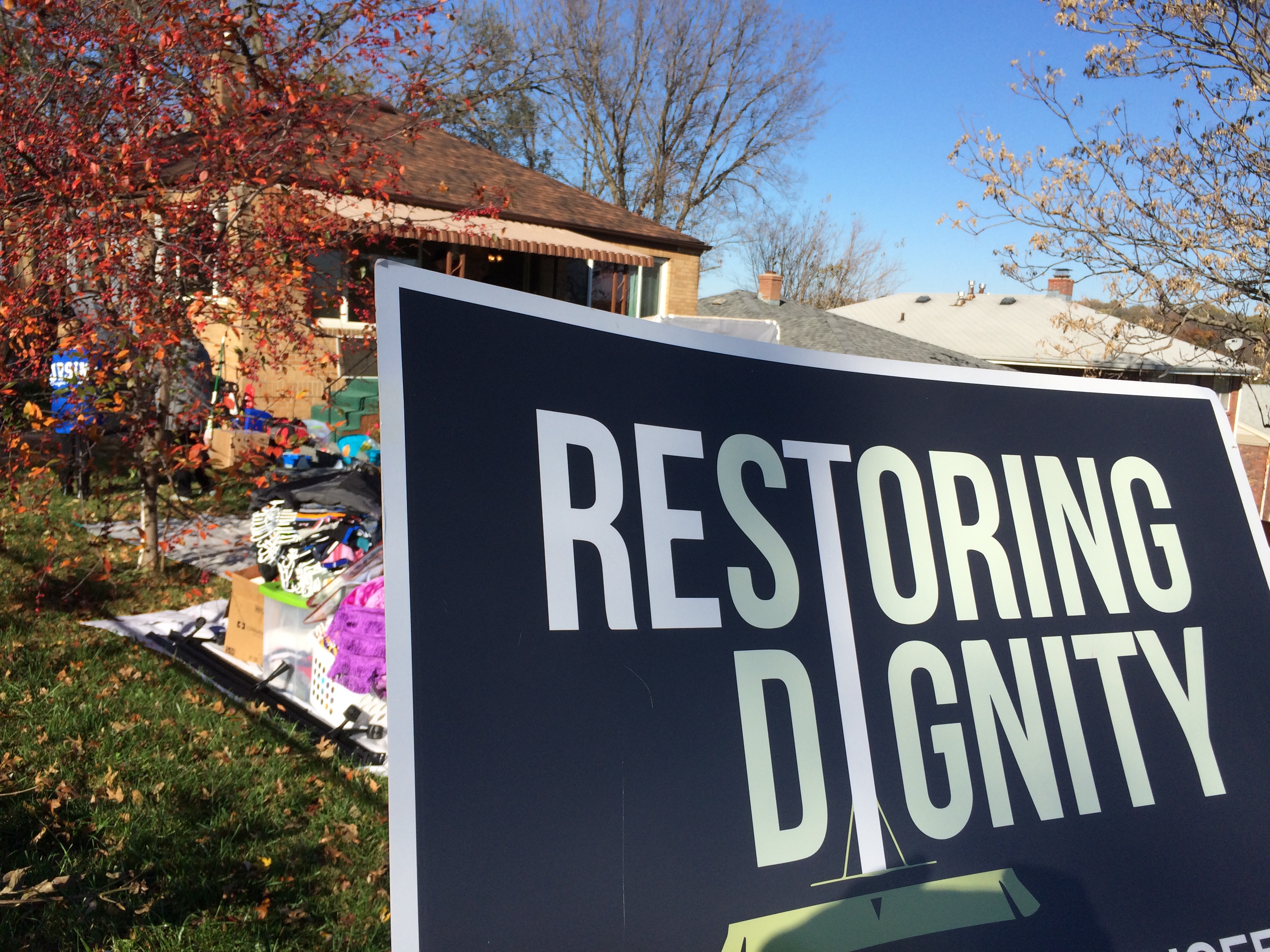 Beyond Awards: The Heart of Restoring Dignity

Our Founder, Hannah Wyble, received an award for community service! Read her story about how Restoring Dignity started.

This past week I was honored to receive a Jefferson Award for “outstanding community service” on behalf of volunteer work done with Restoring Dignity. My first reaction was shock, and then deep love and appreciation for all of the supportive people who have walked with me along this journey. Never in my life have I seen such compassionate and giving people than I have being part of this movement. Whoever has lost their faith in humanity has never worked side by side the volunteers of this organization.

With all of the love and joy surrounding this award and the public recognition of what we do, there is a deeper part of my heart that aches quietly inside – a part of myself that I would like to share on this website for what I believe is the first time. For me, Restoring Dignity was never something that began out of great ambition or out of a desire to “save the world” or to find a meaningful cause. It was never something that started so we could win awards or be recognized. Restoring Dignity began with tragedy.

It was July 2012 and I was 24 years old. I remember this time in my life vividly, because a lot was going on with my family and my ambitious heart was ablaze with dreams that burned through my days and nights. A year before, I had decided to begin pre-medical studies at the University of Nebraska at Omaha. I was going to become a research doctor – the goal being to storm the medical field and find a cure for preeclampsia- a medical condition that had almost claimed my life twice with my two pregnancies. That hot and sultry July month, I had applied for a competitive research program at the University of Nebraska Medical Center, and was waiting to hear back to see if I had been accepted. Everything was going as I wanted it to go: I was enjoying school, my husband, Gerald’s, DJ career was blossoming, our kids were happy and healthy.

Then July 20th happened. What started out as a fun and joyous night at a local music hall where Gerald was DJing ended in tears and utter shock. A friend of ours informed me that a young woman I had mentored while I was a teenager had ended her life. Her name was Nyaduor, and she was an 18 year old  Sudanese refugee. We had met years back at The Salvation Army shortly after her father passed away. Her family had traveled from a refugee camp in Africa to Omaha, Nebraska, only to have this tragedy fall into their lives. I was 16 at the time and intimidated when I found out that my duty as a volunteer would be to help this family during their grief process. I didn’t speak their language, I didn’t know anything about their culture, and to be honest, they looked just as apprehensive of me as I was of them. What if they didn’t like me? What if I couldn’t be what they needed during this time? Needless to say, the more time I spent picking them up from their homes, bringing them to The Salvation Army, teaching classes, learning all of their names and bits and pieces of their language, the more I grew to love them. I started leading a teen Bible study at my parent’s house and many of the Sudanese girls came, including Nyaduor.

For a four year period, myself, my parents, and my then boyfriend (now husband), volunteered together weekly (sometimes bi and tri weekly) with both the Sudanese families and with inner city youth. It was a fulfilling time that came to an end after I developed preeclampsia 31 weeks into my pregnancy with my son, Elias, and he ended up in the neonatal intensive care unit for 2 months after birth. After this happened, I couldn’t commit my time to volunteering anymore, and I regrettably lost contact with many of the families and youth that had been part of my life for a long time. Fast forward two years and our second son, Ezekiel, was born premature due to severe preeclampsia and also spent time in the neonatal intensive care unit. Fast forward another two years to July 20th, 2012, and I found out about Nyaduor’s passing.

In utter and complete shock, my mother and I went over to Nyaduor’s home and sat with her family, grieving and helping them plan the funeral. A week went by, the funeral happened, and we continued to visit Nyaduor’s family in their home. The more time I spent in Nyaduor’s home during and after the funeral, the more I saw the pervasive bleeding wound of poverty. There were no sheets on any of the beds, the family shared two towels, there were only two working light bulbs in the house, the carpet desperately needed cleaning. As a widowed refugee mother of 5 children, money that came into the house was spent on the most immediate needs – there was no money left over for house repairs and the like.

When Nyaduor and her family had first moved to the United States, it was a time of renewed hope. After spending years fleeing the war in Sudan, and years waiting in a refugee camp – a ticket to a new country was like winning the lottery. I am not sure if many people know this or not, but of the 14.4 million refugees in the world, less than one percent are resettled to developed nations.

After arriving to the United States with no knowledge of the language or culture, Nyaduor’s father passed away, leaving his wife to raise 5 children by herself. Losing a spouse has to be one of the most painful and devastating events in life. Losing a spouse as a refugee in an unfamiliar country has to be even worse. Personally, I cannot even imagine what it is like to be a widow, let alone a widowed mother of 5 young children in a country where one does not speak or read the language – and she does not speak the language not because she does not care, but because she hasn’t had time to learn; because she was abruptly forced out of her own home, in her own country, due to people who couldn’t stop fighting each other. War sucks.

“Of the 14 . 4 million refugees in the world, less than one percent are resettled to developed nations.” (Source: UNHCR)

One night, after leaving Nyaduor’s house, I told my mother that I wanted to help her family in whatever capacity possible. We had just bought a carpet cleaner, and I remember saying, “I am going to clean their carpet. It’s not much, but it’s something.” Another night of brainstorming with the family’s cousin, Sunday K., and we came up with the idea to publish a list of items that the family needed on a free blog. All we wanted was to restore some hope and dignity to this family’s life – to give them a healing environment where they could grieve and not have to worry about sharing two towels, or having to take a lightbulb from one room to the next for light, or having to sleep on a mattress with no sheets. It was the least we could do for them.

We received twice as many donations as we asked for and 30 people showed up to volunteer. Through talking with other family members of Nyaduor, I found out about another widowed Sudanese refugee who was living in poverty. So another “Restoring Dignity” event was created on the blog. After we helped that family, a refugee caseworker reached out and asked if we could help a Karen refugee family of 7 whose father was about to pass away after a long battle with cancer. So another event was created on the blog. With each completed project, another struggling family was brought to our attention. Almost 4 years later, we have served 19 families and over 500 people have volunteered with Restoring Dignity.

In my heart, I am incredibly happy to see that so many people want to help others in our community. It feels incredibly gratifying to see a struggling family and help them to their feet. It feels good inside – like purpose. It feels like this is what life is supposed to be about: seeing a desperate need and fulfilling it – with no expectation of return. It feels pure and clean, like this is exactly what we are supposed to be doing.

And yet, in the quieter moments of my life – like today, I think back to Nyaduor. I think back to her smile, and her wittiness, and I remember picking her up from her house so many times: listening to hip hop, eating pizza rolls with hot sauce, taking silly pictures and having fun at summer camps. The truth is that I would give Restoring Dignity up in a heartbeat, if it meant that she could have her life back. Because to me, this organization is only here because Nyaduor is gone. Restoring Dignity is my response to losing someone who made a significant impact on my life. It’s also been my awakening to people who have been through horrific tragedy and loss – seeing their condition and finding a way to make things better for the moment.

“Restoring Dignity is my response to losing someone who made a significant impact on my life.”

During the hot and humid month of July 2012, I began to wake up to the needs present among the most disadvantaged people in our community. It’s been a long process, and I am still learning (through mistakes and through the incredible Omaha refugee caseworkers) and am still awakening to the lives of others. What I have learned over the past 4 years is that someone needs to hear the cries of the oppressed, the weary, the widowed, and then something needs to be done. Whether that something is teaching cleaning skills, bringing beds, doing clothing drives, or helping with an adult ESL class. And regardless of whether Restoring Dignity wins future awards or garnishes accolades, I will keep showing up to lead forward this movement of people who have also awoken to the needs of our community.

2 thoughts on “Beyond Awards: The Heart of Restoring Dignity”